So, here’s what we know about the impending Star Trek return of Jean-Luc Picard: he will be played once again by the inimitable Sir Patrick Stewart; he will reprise the role in a new series for CBS All-Access, where Star Trek: Discovery has been gaining warp-speed momentum. The new series will take place 20 years or so after the last Star Trek: Next Generation movie, Nemesis (a 2002 release). 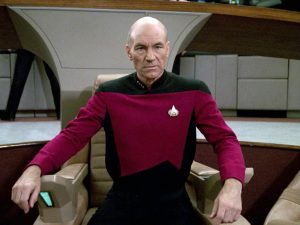 Beyond that, we don’t know much for certain yet. According to Stewart, who came on stage to announce (or rather, tease) the series at Star Trek Las Vegas earlier this week, we could end up seeing a different Jean-Luc Picard than we’re used to. As Stewart clearly stated,

“I have to tell you, he may not – and I stress, may not – be a captain anymore. He may not be the Jean-Luc that you recognize and know so well. It may be a very different individual, someone who has been changed by his experiences.”

Scripts have yet to be written, and negotiations are underway, but Jean-Luc Picard will definitely be returning to a new Star Trek show. Cue Scotty/O’Brien/other transporter room specialist to beam us up for Trekkie bliss as soon as possible.

Additional Star Trek series have been hinted at as well, including a teen-oriented Starfleet Academy series and an animated series, but details have yet to be released.